Today (Friday 29th April), we hosted the 2nd South Partnership Football Championship, to find the champions for our cluster of Transform schools to send into the Trust Finals.

Highbank, Whitegate, Edale Rise and William Booth joined us for a round-robin league format. Every match was a close one – no match was won by more than one goal. Every team got some points on the board. The standard of play was extremely high this year, as was the sportsmanship and great attitude from all teams.

As the afternon went on, it became apparent that the final match between ourselves and Highbank would be the decider. They had three wins, whilst we had two and a draw.

A draw would do the job for our visitors, whilst we needed a win. We just about edged possession and chances, but with only a minute to play, it was still 0-0 and the trophy was heading to Clifton. However, a speculative, some might say desperate (!) long shot from Alex found its way in to give us a 1-0 lead and ultimately the win we needed. Tough on Highbank, but nice for us and it has to be said we’ve had our share of similar ‘heartbreaks’ over the years. Deserved too, we think, as we were probably the better team in every match we played, didn’t concede a goal and never really looked like doing so and the 0-0 draw had been a really frustrating one whre we had dominated but just couldn’t score. 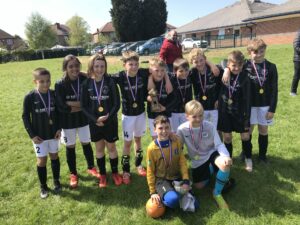