What a way to finish the year! The first time we’ve won the Gedling Primary Schools FA Cup in living memory, girls or boys.

Having played through the Autumn and Winter League to qualify and then battl;ed through several tough knock out rounds amongst the league winners and runners-up, this was an arduous journey – a very difficult competition to win and always a very high standard.

This concluded two years of hard work from this squad, who have made enormous progress. Up against a very strong Arno Vale side in this delayed final, the girls put in a magnificent performance.

Played on a dry, bumpy pitch at Calverton Miners Welfare FC, we got off to the worst possible start. Arno Vale came at us strongly from the off, playing some excellent passing football. Five minutes in and a bobbling shot crept in between Lottie and the post to put us one down.

Undeterred, the girls dragged themselves back into the match, dominating possession and territory for much of the rest of the first half. Arno Vale still continued to threaten, but mostly on the break now. We played some wonderful football, but could not find a goal.

The second half continued much the same, with us looking strong in defence, dominant in midfield and lively up front. Arno’s keeper made two good saves and we narrowly missed a couple. Ten minutes gone and Sofia pounced on a half chance in the 6 yard box to draw us level.

Still we continuend to control the game. Amy and Lola were immense at the back. Danayah held everything together and just couldn’t be stopped at times. In midfield, various combinations of Evie-Grace, Layla, Georgia and Amelia (complete with fractured wrist) were defensively strong and quick and incisive going forward. Lottie made two good saves to keep us in it. Still no goal though and then…

Disaster. Ten minutes to go and Arno Vale scored a neat goal from a corner. 2-1 down and running out of time.

We pressed, throwing everything at them. Their keeper made saves, we hit the woodwork, sent shots inches wide. One of those days, we all thought, until… step up Layla with a scorcher into the top right, curling in from about 20 yards out. Game on and extra-time looming.

Sofia had other ideas though and, picking up on a pass at the end of a great run from Danayah, lashed the ball home hard and low from 15-20 yards out.

That left two minutes to play out. We played cautiously and robustly. No nonsense, nice and calm. The relief on the final whistle was incredible and there were plenty of happy tears.

Arno Vale were excellent, respectful opponents and our girls were gracious in victory. There was a short but lovely presentation and back-to-school it was with the cup and winners’ medals.

Thanks to all the girls and their super supportive families for a wonderful year of football. I can retire happy and fulfilled, when the time comes! 😉 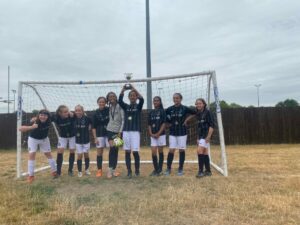 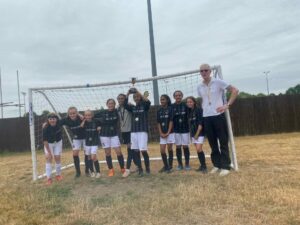