Our girls reached the final of the Gedling PSFA Cup for the first time in many, many years with a resounding semi-final victory on Friday.

Having qualified for the knock-out stages by virtue of winning or being runners-up in their league, teams then play one-off cup-ties. hence, all the teams left in are strong ones, making this a tough competition to win!

Our girls had already knocked out one of the favourites, with their dominant 6-2 win away at All Hallows.

A tough match was expected at home against Richard Bonington, but our team put on an awesome display of powerful, skilful football to romp to a 7-0 win, which frankly would have been many, many more but for a wonder-performance by the visitors’ goalkeeper.

It took ten minutes to break through and find a goal, but once we did, the floodgates opened. 3-0 at half-time and another 4 added in the second half.

Everyone played their part – this was a brilliant team performance, based on strong defence, busy and creative mdiefield and fantastic finishing up-front. Lottie had a very quiet time of it in goal, but kept her focus and concetnration for the few times she was called into action.

Next up for the girls then, the final  – date and venue to be confirmed, against Arno Vale. 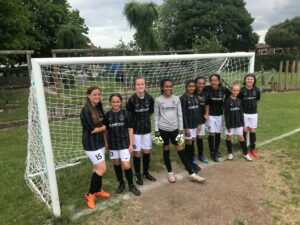